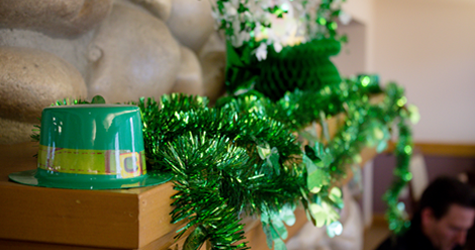 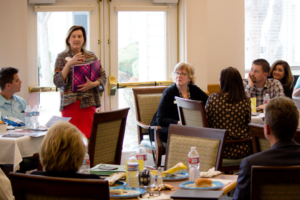 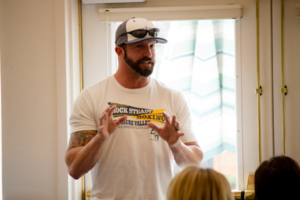 The March luncheon was held at Brookdale Independent Living, and co-sponsored by Comfort Care and Auburn Crest Hospice. We all enjoyed a Subway sandwich spread and got in tune with our inner Irish with a whole lotta green decorations.

Our first order of business was to get everyone up to speed with how the 2017 Caregiver of the Year Awards are moving along. The theme has been announced as “Angels Among Us,” and thirteen caregivers from each category (Certified Nursing Assistant and Personal Care Attendant) will be selected as finalists Nominations are currently open (download your form HERE). Nominations are due April 25th, so get them in! If you need help writing the nomination, contact any board member and we’d be happy to help out!

Caregiver of the Year chairman Shayne Burr also announced that CGOY raffle tickets are now for sale. There will only be 600 tickets sold for a chance to win a trip to one of three awesome places! Tickets are $20 each (or 6 for $100) and can be purchased from most CGOY committee members. Let the annual Shayne Burr/Mike Briggs raffle ticket-off begin!

Silent auction baskets are now being accepted for the event as well. If you would like to donate a basket of goodies to the event, contact Jackie Smith. Tickets to the event are also now available for reservation at $15 a piece. There are only 230 seats available and it sells out every year, so getting them early wouldn’t be a bad idea. Cody Freston is the one to see for tickets.

After the CGOY update, scheduling required us to do the educational presentation first. Scott Andeerson of Functional Fitness in Meridian told us about his “Rocksteady Boxing” program, a non-contact boxing class for people that suffer from Parkinson’s Disease. They have roughly 25 boxers right now, and have seen a huge improvement in their health, confidence, and overall quality of life. They’re now partnering with St. Alphonsus on a study to determine just how beneficial the class is to the boxers. Scott also took a Q & A session from the membership and shared some uplifting stories about the class.

After the presentation, we circled back to member announcements. Morningstar announced a wound care clinic on March 29th, and assured us that gross-out fans would very much enjoy the visual aids. The Leadership Development Series announced their next session on April 21st at the Riverside would deal with Managing and Surviving Organizational Change.

The Alzheimer’s Assocation told us aabout their move to a new office, and assured us that there would be an open house somewhere far, far down the road when all the boxes are unpacked. They also reminded us about an upcoming financial class, and put out the call for more sponsors for the Walk to End Alzheimer’s.

Stevens-Henager told us about an upcoming coding camp for those techies looking to break into the field.

Finally, Donna Rogers from Brightstar announced that she’s leaving the medical field and introduced us to her replacement, Sara Kolnes. While the healthcare community is sad to see her go, the news was tempered by the announcement that she’ll still be sticking around in HAPPEN and will remain the Education Director.

After the announcements, our hosts took a moment to introduce themselves. Lorrayne Russman from Brookdale told us about an open house they’re having at their independent living facility. Comfort Care talked about their commitment to meaningful care, and about how all of their staff are traned for better care for dementia patients. Auburn Crest told us about how they offer a different, relationship-based care service.

Finally we had a drawing for three baskets (one provided by each host). Jackie Smith, MacKenzie Rodgers, and Donna Rogers. Congrats, ladies!

Thanks again to our March host, Brookdale Independent Living, and our co-sponsors, Comfort Care and Auburn Crest Hospice! See you all next next month!