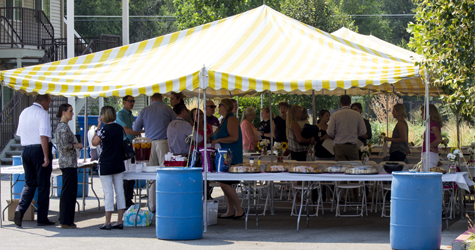 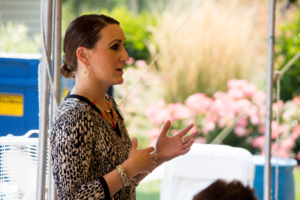 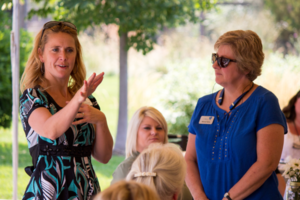 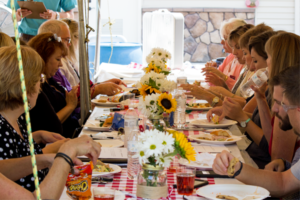 The August luncheon was held at The Cottages of Boise, and was co-sponsored by Bridgetower Chiropractic and Home Instead. We bade farewell to the dog days of summer with an outdoor meal of sandwiches and salad, along with cookies, chips, an punch.

This meeting started a little differently, as we asked people to sit with members that they didn’t know and wouldn’t normally sit with. As everyone chowed down, we had a little Q & A session so that later in the meeting members could introduce new friends. More on that later…

The August meeting was relatively light on member announcements (as everyone was most likely exhausted from the jam-packed summer of activities), but there were a few items that were called to attention. Comfort Care told us about a free Dementia-Wise Webinar and alerted us to the fact that we’d need to pre-register if we wanted to attend (e-tend?). Did we mention it was free? Cody Freston also announced a new hospice opening – Doctors Hospice of Idaho – because clearly Cody doesn’t have enough to do and he’s getting bored. Finally, Willow Park announced a dinner that they were hosting.

After the member announcements, Aaron teased a number of changes coming to HAPPEN. While no changes have been put in place just yet, he foreshadowed several things that will be put in place in the coming months. First, an expansion of the scholarships that HAPPEN offers and incresed frequency of the awards. Also, there will be a change coming to the way literature is distributed at the monthly meetings to give more deference to the sponsors. Each meeting will also now have greeters to make newer members feel more welcome, but this should not be in any way compared to Wal-Mart (okay, it’s kinda like Wal-Mart).

To further improve HAPPEN, we also passed around a membership survey to collect ideas from the membership about how HAPPEN can serve the community better. There were a lot of great ideas, and we’ll be seeing the fruits of them in the next few months!

After the sponsors spoke, we came back to the membership Q & A. Each pairing introduced their new best friend to the membership with a (brief!) fact about their business or them personally. We were introduced to many new smiling faces and alerted to a lot of businesses that we may not have known about before. So, y’know, networking.

Finally, we spoke a little bit about our Facebook page and how we need to get it to 100 likes to implement a bunch of new non-profit features. We’re really, close, too!

Thanks again to our August host, The Cottages of Boise, and our co-sponsors Bridgetower Chiropractic and Home Instead! See you all in September!