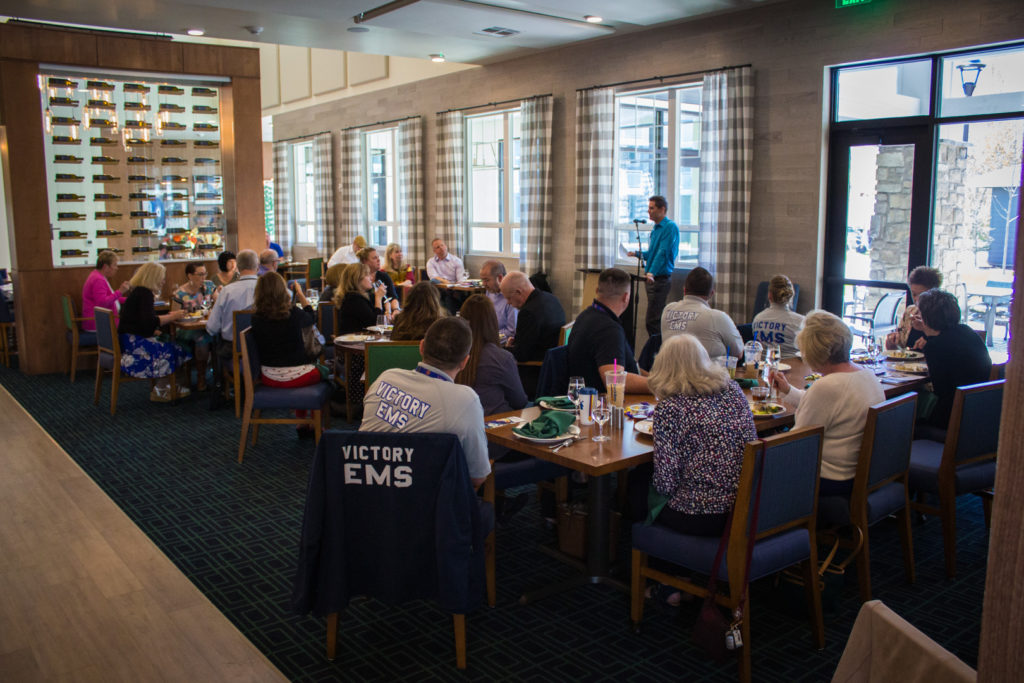 April’s meeting was held at Revel Eagle, and co-sponsored by Progressive Nursing and Victory EMS. Lunch was provided by Ovation, Revel’s super fancy-pants on-site restaurant. There was chicken with capers, creamy cheesy pasta, but most importantly there was whipped butter for the rolls so we didn’t have to try to spread frozen butter packets. Not that that’s a pet peeve of mine or anything.

We did things a little differently this month, and had the sponsors talk first. Revel invited us on a tour after the meeting and talked about this completely independent senior living community that has a pub, and I might see if I can move in tomorrow. Progressive Nursing told us about their home care and staffing services and thanked the awesome HAPPEN community. Victory EMS rounded things out by talking about their employee-driven focus on medical transport.

After the sponsors, a few guests were introduced, and then it was right into announcements.

Next up was Jackie Smith to talk about scholarships. There are over $24,000 of scholarships available, so if you’re curious about what’s available, check them out here. She also told us about the silent auctions and anyone that wants to provide a basket for the auction may still do so!

After Jackie, Mike Briggs got up to the mic to tell people about the CGOY raffle. They’re $20 apiece or 6 for $100.

Cody Freston followed Mike to talk about seating at CGOY and about how we’re almost sold out already. If you need a ticket and haven’t bought one yet, get on it! Contact Cody now!

Whew. A lot about Caregiver of the Year.

After we finished with Caregiver of the Year announcements, Aaron gave us the update on how the member directory is coming along. Next meeting will have a sheet to fill out to categorize your business so that our member directory can get finished!

Horizon told us that they will be hosting a golf tournament on June 14th, and still need golfers and volunteers. Terry with Senior Goldmine got up to announce that he’s still the owner of Senior Goldmine and then threw a bunch of shade at Cody, which is always entertaining. Finally, there will be a Chamber meeting at Wahooz… sometime next week. Or something. Honestly, it was being relayed to Aaron at the microphone and told in short spurts, and it was kinda confusing. Let that be a lesson – go make your own announcements and don’t trust them to Aaron.

There was no educational speaker this month, as it was a purely networking event this time, so we finished a bit early and everyone mingled and networked.

Next month the meetings take a break as Caregiver of the Year takes its place! See many of you at CGOY, and the rest of you in June!